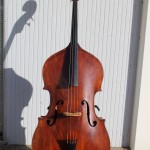 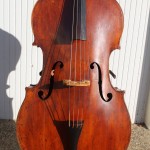 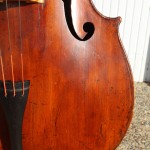 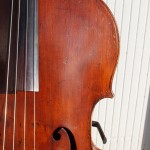 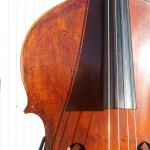 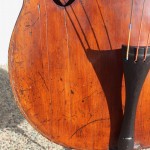 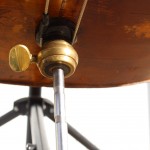 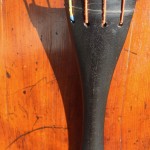 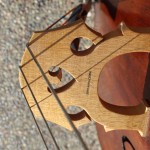 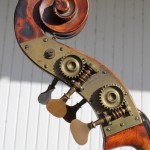 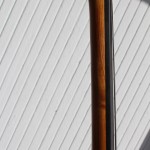 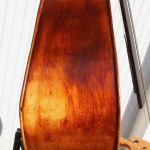 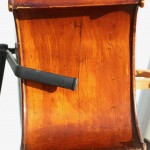 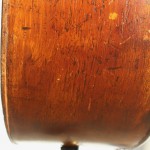 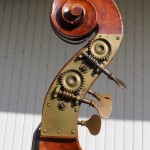 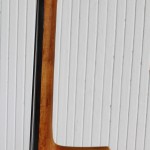 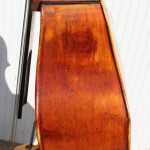 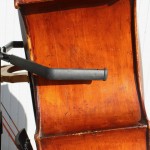 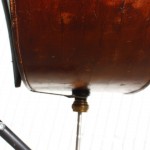 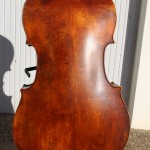 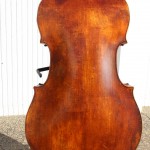 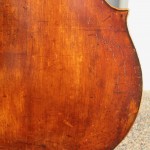 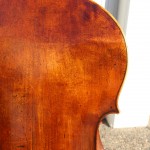 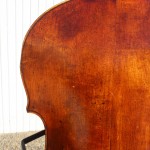 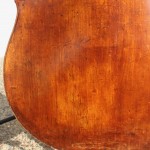 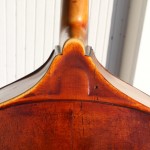 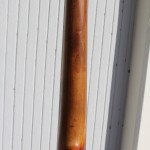 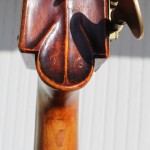 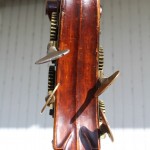 This solid performing ca. 1840s large modified French 3/4 she carved back bass has been used consistently for 40 years by the consigning owner in orchestras, particularly in Seattle. The bass has a large, rich voice that is nearly accessed with the current stringing of Permanent E and Bel Canto A, D, G. The bass is quite resonant in the bottom of the range and is an ideal candidate for a C extension. The top and back plates resemble Italian making in that they have fairly low arching, which gives a relaxed and resonant character to the voice. The top plate is not overly thick, as production French basses from the 1870-1920 period can be. Maintained for several years by Seattle luthier, Sarah Balmforth, the bass has had some cracks  and injuries repaired over the years. The bass bar size and narrower nut width suggest an original 3 string configuration. The medium to fine grain width of the unmatched halves of the spruce shows prominent winter grain. The relatively plain back and sides have a medium tap tone quality that gives a warm quality to the voice. The lighter density maple neck reinforces this warm character. The tuning machines are a mix of elements that would have been found in the later 19th century into the early 20th century. The brass half plates appear to be from the early 20th century, when the 3 to 4 string conversion was performed. The scroll is particularly large and handsome for a French instrument. The dimensions are: Top length 43 3/4″ (111.1 cm), Upper bout width 20 3/4″ (52.7 cm), Middle bout width 15 1/8″ (38.4 cm), Lower bout width 26 1/4″ (66.7 cm), Depth at tail to upper bout crease 8 1/2″ (21.6 cm), Depth at neck joint 6 1/8″ (15.6 cm), String length 41 3/4″ (106.0 cm). This bass is a relatively easy to play larger intermediate size orchestral bass, which a rich plummy tone and fine resonance down to a low C note. With custom modified Pro Tec cover.